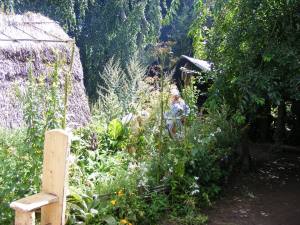 And so we’ve seen our garden at Escot and it was… a nettle-filled ditch – damp and draggled and rank.

As we pushed the gate open with difficulty against six-foot mugwort and a deeply impressive plantain, it was clear that this was going to be a job and a half. (With period tools, and in blazing sun.)

I’m not sure either of us even knew where to start. One pair of gloves between us, a rake, and a mattock.

On first sight, it looked like a small enough, manageable space – a shaded patch behind one of the thatched buildings, about twenty feet by twelve, fenced off at one end.

Half an hour in, we found another building half-hidden by nettles and a few unhappy, half-throttled beans – a little wattle and daub  structure open at both ends, ideal for composting our armfuls of weeds.

It’s clear what’s happened – that this has been a valued, loved patch of garden that’s just got away from itself, and, tucked away from the public gaze, the staff haven’t had the time to get on top of it.

By the time we had that patch of ground cleared, the chickens were moving in – aided by young Tristan and Wiglaf’s chicken trails of half-ground grain, and Bersi’s experienced chicken-wrangling. And the patch was considerably bigger than we’d imagined, cleared to the soil – bigger, and as the sun hit it, considerably drier. It seemed what made it damp was a nice solid waterproof layer of matted grass.

After six hours of solid clearance, the chickens were our new best friends. We’d discovered a struggling courgette plant – not period, poor lamb, but gasping for air and light under a mat of nettles – and a few unhappy beetroot plants that we rescued and palisaded off from marauding chooks. The beans were liberated, and we’d ordered a new Saxon spade from our blacksmith friend Jarnulf. I had a pouch of valerian seeds from the site gardener.

The six-foot mugwort was no more. (There’s plenty more, in a more appropriate place. Don’t worry.) I was physically restrained from removing the handsome plantain.

What we’d thought was a few feet of damp soil for herbs, was a good-sized patch, enough for a kitchen garden. The intention is that we start to put plants in as soon as possible. If we weren’t intending to farm authentically, we’d have put potatoes in to break up the soil – as it is, it’ll probably be mattock time. I console myself that Kim and I will have shoulders like Olympic swimmers by next year.

We need to plant ground cover as well as vegetables, to keep the weeds manageable. We need to fill the ground as soon as we can,to stop the wilderness from creeping back while we’re not there. We need to put chicken-resistant seedlings in.

We’d originally planned a kitchen garden, a herb garden, and a medicinal/dyer’s garden, all separate, but I’m wondering if the Saxon gardeners were brighter than that. I doubt they encouraged weeds any more than we do on their good growing soil, though I suspect they were less proscriptive about it than us. I wonder instead if they companion planted – growing creeping thyme and heart’s-ease and violet, the low-growing herbs, amongst their vegetables on grounds that they keep down the unwanted greenery whilst being useful.

My kale seeds are sprouting. I’ll let you know how successful sweet violet is as a weedkiller, in a few months.