Well. What a marvellous, wicked, wanton, dissolute, all-round menace of a caricature Cavalier he was, and now here he is, turning up in Fairfax’s South-Western campaign of 1645 just in time for me to make sport with him.

(An aside – he might have been a most rascally Royalist type, but there’s something strangely appealing about him…) 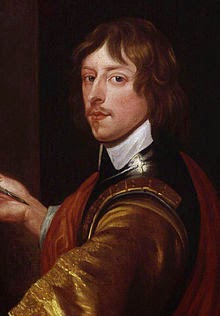 His early days should have tipped Charles Stuart off to the fact that he was a little bit fly.Lord Goring was a courtesy title only – probably more courteous, and possibly less well deserved, than “Take your hands off there sir!” Goring – as he was the son of the first Earl of Norwich. He had an enigmatic limp gained in his soldiering service at Breda, in the Low Countries . He had a reputation, to quote Clarendon, as a man who “would, without hesitation, have broken any trust, or done any act of treachery to have satisfied an ordinary passion or appetite; and in truth wanted nothing but industry (for he had wit, and courage, and understanding and ambition, uncontrolled by any fear of God or man) to have been as eminent and successful in the highest attempt of wickedness as any man in the age he lived in or before. Of all his qualifications dissimulation was his masterpiece; in which he so much excelled, that men were not ordinarily ashamed, or out of countenance, with being deceived but twice by him.”

Officers stationed in York in 1641 proposed to petition the king and parliament for the maintenance of the royal authority. A second faction was in favour of more violent measures, and Goring, in the hope of being appointed lieutenant-general, proposed to march the army on London during the trial of the Earl of Strafford in 1641. This proposition not unreasonably being rejected by his fellow-officers, he dropped them nicely in it by betraying the plot in April 1641. (A nice example of taking one’s ball and going home.) As a result, he was called to give evidence before the Commons, who commended him for his services to the Commonwealth. Having been commended, he promptly declared for the King in August.

Now, this is where it gets whizzy. Appointed Governor of Portsmouth by people who should have known better, he surrendered the port to the besieging Army of Parliament in September 1642, and scuttled off to the Netherlands for a spot of light recruiting. (And, one assumes, a little light recreational drinking and whoring.) In December that year he returns, after what success is not recorded, and then some fool – oh! that will be the Earl of Newcastle! – appoints him to a cavalry command. He defeats Fairfax at Seacroft Moor, in one of his occasional flashes of brilliance, in March 1643, and then cocks it all up again in Wakefield two months later and is taken prisoner by Fairfax in an attack on the town. April 1644, he effects an exchange, and then – this is the man who’s handed over Portsmouth and then lost Wakefield, remember – some numpty gives him charge of the Royalist left flank at Marston Moor. Which commission he carries out initially with great success…. and then allows his troops to scatter in search of plunder. I am delighted to relate that Oliver Cromwell took full advantage of this shocking want of discipline and gave him a right pasting.

In August Rupert dispatched him to the south of England to serve as  as lieutenant-general of the Royalist horse. (God alone knows what Rupert was thinking.) His campaign in the south-west was so vicious that he and his men were cordially loathed by the local residents to the extent that after the battle of Langport in July 1645 the local Clubmen massacred as many fleeing Royalists they could lay hands to in revenge for the Royalist depradations. Which rather makes you wonder about the calibre of officers he attracted…. great minds thinking alike and all.

He made no further serious resistance to the parliamentary general, but wasted his time in frivolous amusements. In November 1645 he obtained leave to quit his disorganised forces and retire to France on the ground of health – possibly the threat to his own of his comrades being so sick and tired of his wanton viciousness, debauchery, and general excessive cavalier-ishness that they might have considered knocking him on the head.

There he is, ladies and gentlemen, Lord George Goring. I couldn’t have invented him if I’d wanted to.